How Industrial Agriculture Affects Our Water

Industrial agriculture is one of the leading causes of water pollution in the United States. 1 According to the 2017 National Water Quality Inventory of Environmental Protection Agency (EPA), 46 percent of the nation’s rivers and streams are in “poor biological condition,” and 21 percent of lakes are “hypereutrophic” (meaning that high levels of nutrients and algae are degrading water quality). 2 Water pollution from industrial agriculture can have many negative effects on both people and the environment. 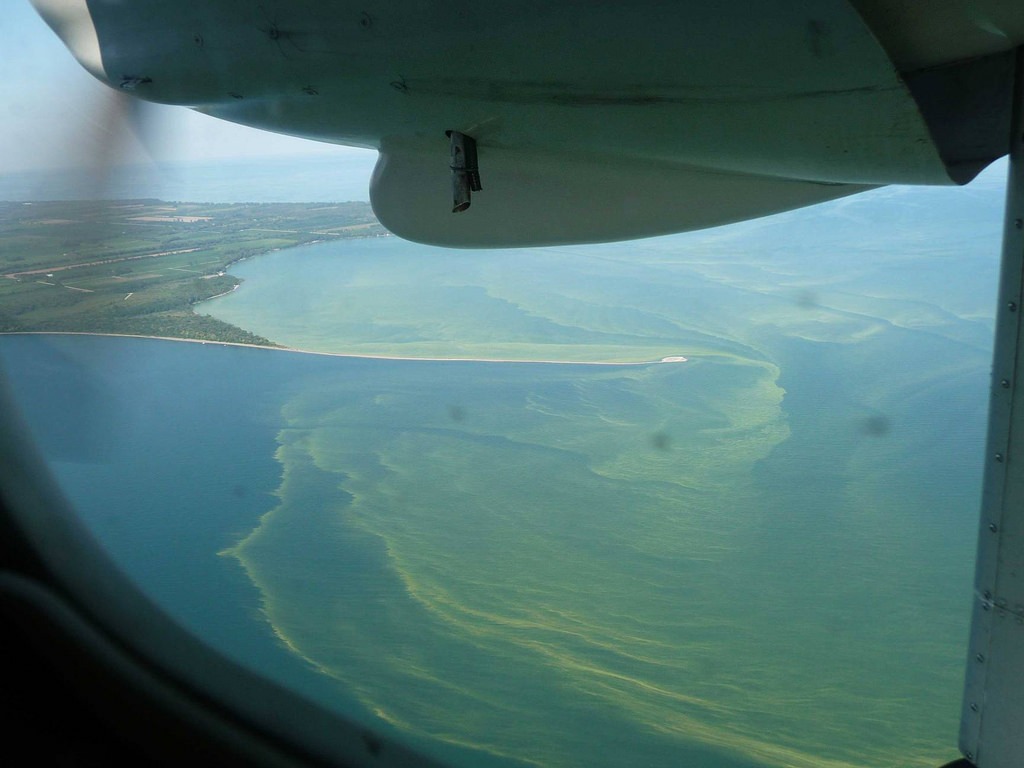 High levels of “nutrients,” such as phosphorus and nitrogen (both components of synthetic fertilizer as well as byproducts of animal waste) threaten the health and biological diversity of waterways, which can result in loss of aquatic life and their habitats, shellfish contamination, and seasonal dead zones. 3 Polluted water also impacts the quality of life and incomes of nearby residents, posing a threat to public health. Beaches may close due to algal blooms, and fishing activities may be severely limited. Excessive nutrient runoff in waterways can impact drinking water supplies and, in some cases, cause severe health problems. 45

What Are the Sources of Water Pollution from Agriculture?

Concentrated animal feeding operations (CAFOs), also known as factory farms, typically house thousands of animals, generating millions if not billions of gallons of animal waste per year. For example, North Carolina alone generates almost 10 billion gallons of animal waste per year. 6 Livestock and poultry on the largest CAFOs generated 369 million tons of waste in 2012. 7 Animal waste is stored either in pits or in open ponds, called lagoons. Such waste-containment areas often leak and, during large storms, can rupture. 89 To dispose of the waste, CAFOs spray this manure onto farm fields. The environmental damage from spraying and from leaking, ruptured lagoons can be devastating. Surface and groundwater contamination (serious threats to aquatic ecosystems) and excessive nitrates in drinking water (serious threats to public health) stem from CAFO pollution. 1011 Animal waste can also include pharmaceutical residues, heavy metals (like copper and zinc), and harmful bacteria, which can leach into water supplies. 121314

Chicken manure is especially high in both phosphorus and nitrogen. Many chicken farmers spread huge quantities of chicken waste onto cropland to dispose of it; far more is spread than can be absorbed, and often more than is legally allowed. 15 When it rains, the excess nutrients and drug residues run off fields into streams and rivers, seeping into groundwater. Chicken waste is also high in ammonia: when dissolved in water, ammonia is not only highly toxic to fish but can also be chemically converted into dangerous nitrates through bacterial action. 16

Nutrients, such as nitrogen and phosphorous, are two of the main macronutrients in fertilizer that promote plant growth. Synthetic fertilizers containing both nitrogen and phosphorus are applied imprecisely to farm fields, often at rates far higher than what the plants need or what the soil can absorb. The excess nutrients from fertilizer leech into surface and groundwater, causing algal blooms and nitrate contamination, impacting drinking water, recreational activities (such as swimming and boating), fishing/shellfishing, and marine and aquatic ecology.

What Are the Negative Effects of Water Pollution from Agriculture?

High quantities of nutrients in the water from industrial crop fertilizers and animal waste cause excessive aquatic plant growth — a process known as “eutrophication,” which, in turn, causes “hypoxia,” or water that is low in oxygen. 17 Harmful algal blooms (or HABs) occur when aquatic algae grow rapidly out of control. 18 Some types of HABs produce biotoxins, which can kill fish and other aquatic life and cause human illnesses, while others use up the oxygen in the water producing “dead zones,” where aquatic creatures cannot live. 19

Nitrogen fertilizer applied in the farm fields of the Midwest eventually makes its way to the Gulf of Mexico; this, along with runoff from animal waste, is one of the leading causes of the so-called Gulf “Dead Zone,” an oxygen-deprived area 8,000 square miles in size, in which no fish can survive. 2021 In places like the Eastern Shore of Maryland, home to thousands of chicken broiler houses, rivers have phosphorous concentrations that are among the highest in the nation, which is linked to the estimated 228,000 tons of excess chicken waste spread in the state. 22 The Chesapeake Bay, which receives runoff from the many chicken houses on the Delmarva Peninsula (parts of Delaware, Maryland, and Virginia), experiences regular toxic algae blooms and dead zones. 23

Ammonia from agricultural runoff can also degrade ecosystems by acidifying waterways, which can affect the ecology of streams and rivers. 24

In CAFOs, excessive amounts of heavy metals like copper and zinc are fed as supplements to pigs and chickens, to promote growth and prevent disease. 25 Other metals present in animal waste can include cadmium, lead, mercury, and arsenic. 26 These metals accumulate in soil when animal waste is sprayed on farm fields and can contaminate water supplies. 272829 In humans, copper toxicity can cause gastrointestinal and liver disorders, as well as other health problems. 30 Copper can also damage the environment, negatively affecting soil microbial activity and plant growth, which can be toxic to fish and aquatic life in waterways. 31 Zinc pollution can also cause fish kills and damage to algae, crustaceans, and salmon. 32

Nitrates and Other Contaminants in Drinking Water

Elevated nitrate levels in drinking water can be dangerous to humans, causing low oxygen levels in infants (known as “blue-baby syndrome”) and low birth weight. 33 Elevated levels of nitrates in drinking water may also be an indicator of other agricultural-related contaminants in the water supply, such as pesticides. 34

While the EPA itself says that nitrate levels above three milligrams per liter of water indicate “contamination” and levels above one milligram per liter indicate contamination due to human activity, the EPA sets nitrate contamination standards at 10 milligrams per liter to prevent the blue baby syndrome. 35 In a survey of state nitrate groundwater pollution (indicated as greater than five mg/L), 53 percent of Delaware’s groundwater was polluted with greater than five mg/L of nitrates, as well as 28 percent of Maryland’s and 10 percent of California’s. 36 Each of these states has a large number of factory farm concentrations. 37

Chemical pollution of drinking water from agriculture is also a problem. As many as one million Californians, for example, mostly living in the farming communities of the Central Valley, have dangerous levels of unregulated chemicals linked to cancer in their drinking water, according to California’s State Water Board. 38

Animal waste contains a high level of pathogens (disease-causing microorganisms). Swine waste, for example, can contain more than 100 pathogens that cause human diseases. 39 When factory farm lagoons leak, contaminated water can end up in waterways and in groundwater. Pathogens can survive after being sprayed onto farm fields, leaching into groundwater, or being transported to surface water due to runoff. 4041 People can become sick simply by ingesting water during recreational activities (e.g., swimming or boating) or by consuming contaminated drinking water. 4243

The original Environmental Protection Agency (EPA) rule addressing CAFO waste under the Clean Water Act was finalized in 2003. This rule regulated all factory farms as point source polluters or identifiable sources of pollution. 44 All CAFOs were required to apply for a National Pollutant Discharge Elimination System (NPDES) permit, under the presumption that CAFOs have the potential to discharge pollutants into waterways. 45 The NPDES permit limits what can be discharged, sets an acceptable level for pollutants (e.g., sets the permitted level for bacteria), and specifies monitoring and reporting requirements. 46

The original rule has since been updated several times because of lawsuits, most recently from the National Pork Producers Council. The rule now states that only large operations that discharge manure directly into waterways are required to obtain a federal NPDES permit. Facilities that plan to manage waste in lagoons and dispose of it by spreading or spraying it on cropland need no permit. This is despite the reality of leaks, spills, and runoff from such facilities. Pollutant-filled water that runs off during rain or due to over-application falls into the category of agricultural stormwater, which is regulated as a nonpoint source and does not require a permit. 47

In recent years, lax regulations and government inaction about water pollution from CAFOs have meant that locals are increasingly using lawsuits to act to protect local waterways and drinking water. 48 However, local and state lawmakers, often working with the “Big Meat” companies, have countered this movement by passing laws that make it easier for CAFOs and processors to operate in local communities, even when there is community opposition. 49 50 Further, in many cases, as in North Carolina, CAFOs operate in poorer areas that are disproportionately inhabited by minorities. 51 This has, in part, given rise to a robust environmental justice movement in these areas to drive the fight against CAFO pollution. 52

Although much of the water used in the US is obtained from surface water sources, many families continue to draw well water from the ground. According to the EPA, 13 million households rely on private wells for drinking water. While public drinking water systems are regulated by the EPA, private drinking water wells are unregulated and do not need to meet EPA clean water standards. 53 Unlike public water systems, private wells aren’t required to undergo routine testing, either. Thus, families that rely upon private drinking water wells are especially vulnerable to the harmful effects of water pollution from factory farms and other forms of industrial agriculture and must test their own drinking water to avoid health problems. 54

Agriculture accounts for 80 percent (in Western states, up to 90 percent) of all freshwater use in the US. 55 Most US farms in the Midwest use center-pivot irrigation: long overhead sprinklers that rotate around a central axis. Center-pivot irrigation and similar methods encourage the use of large quantities of water, draining underground aquifers. The Ogallala Aquifer, which stretches from Wyoming and South Dakota to the Texas panhandle and supports nearly one-fifth of US wheat, corn, and beef cattle, has already run dry in some places and is reduced by as much as 60 percent in others. Comments Off on How Industrial Agriculture Affects Our Water InDefault